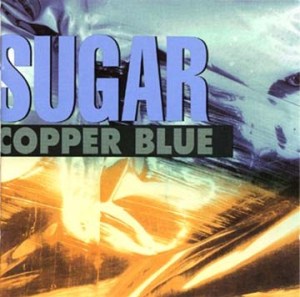 It is September 2012, a bit chilly out, a mist of rain that night, and I find myself a few feet from the stage, packed amongst several hundred others at the Metro. Bob Mould comes out with his new band and promptly starts playing the first song from Copper Blue, “The Act We Act”. Even if the 15 foot speakers were not 10 feet from my ears, the music is felt more so than heard. I am there at the Metro, but I’m also 21, just graduating college. I’m at my desk plodding thru organic chemistry and physics questions with Copper Blue playing on repeat in the background. It’s a warm summer night, but cool in my car with the top down and the stars dancing above, on the road to Michigan City or Fond Du Lac or Madison, with “Changes” on the CD setting the tone. The album is played that night start to finish at a frenetic but absolutely familiar pace. My heart pounding a half-tick ahead of the tempo as I am here, 42 years old, at the Metro, but also 22 years of age with my life ahead of me.

I have tried to recreate that moment at the Metro time and time again. Those points in time when the moment is more than just the sum of sounds, sights and smells. There are a few settings in my life where the experiences of the present are so familiar and comfortable, that they merge with my memories of the past. Water polo has been that way for me.  The coolness of the water, the ache in my legs as I eggbeater up to block the shot, the sting and that uniquely pitched thud created by neoprene on my forearm while craning my head, looking down the pool to find the open man on the counter. I leverage my hips and my body in the water to find the right arc to drop the ball in front of my teammate. I am here playing for the Gators, but I am also back in Madison, playing at the SERF with my Badger teammates. It’s like putting on the perfect sweatshirt. So comfortable. No rough tags, soft and worn. Nowhere tight. Warm but never hot. Even more than the comfort of wearing it, is the anticipation of putting it on. I know what it is going to feel like before I have even pulled it out of the closet. It brings me back to lazy weekends away with Beck, drinking coffee, reading in front of a fire. I am comforted almost as much by the thought of the sweatshirt as the act of wearing it.

But what happens when, one day, the sweatshirt doesn’t fit?

In hindsight I can see more clearly when things changed. I would have good days and BAD days in the pool. The bad ones dragging me down for a while. But always chomping at the bit for the next practice to make the blocks, set up my teammates and tap into the memories of my youth.  The “off” days though started to outnumber the good. Injuries, aches and pains along with fatigue were not excusable, but tolerable. But reflexively turning my head away from shots was unacceptable and just shameful. Practices became more a source of frustration, and along with my receding hairline, proof of my advancing age. Injuries suffered take longer to recover and I find that being goalie no longer feels like that comfortable sweatshirt. I am frustrated just thinking about practice and I miss the excited anticipation that Monday and Wednesday nights used to bring.

There are a few other roles I play in life that, although not as “visceral” as listening to the music of Bob Mould or playing goalie, have started to feel a little less like that comfortable sweatshirt and have me feeling off my game.  In my role as parent, I find myself more and more staring at my kids in disbelief, having no idea whatsoever how to respond to what is playing out before me. I have never seen this sweatshirt before.   My early AM runs that were filled with a sense of pride and purpose, along with a nice dose of endorphins, are now plagued with fatigue and various pains in my back, neck and knees.  That sweatshirt seems to hurt at the moment. I question more and more my role as a physician. The pride and joy of  interactions with my patients and colleagues, have given way to increasing frustrations on a daily basis. Sometimes I don’t want to put on that sweatshirt.

Now, I’m not sure if the dissonance I’m feeling is predominately that of a body growing older or that of a mind growing less fluid and flexible with the times and my kids. But moving forward, I feel I need to have more of a strategy than vicoden, a good chiropractor and a shrink (not necessarily in that order).

So as I start to form a plan (no… I actually don’t have one quite yet), I can see a few hazy parts becoming clearer. Some of it involves rethinking my roles… more coaching than playing (although it actually causes an ache inside me to write that), more often stretching and strengthening then “going long” running or biking (although not ready to give up on long distance tri’s). Having more patience and doing more mentoring than “telling” and “demanding” of  Madison and Maya. Maybe I need to change my “shape” a little bit, and the sweatshirt will feel comfortable again.

I definitely don’t have the answers at the moment, but I plan on figuring it out. Hopefully before too much vicoden and before I exhaust the limits of my health insurance for therapy (physical and mental). But in the meantime, I’m still stalking Bob Mould throughout the midwest, listening to him and his band, bringing the past back into the future for me. That sweatshirt still fits perfectly.